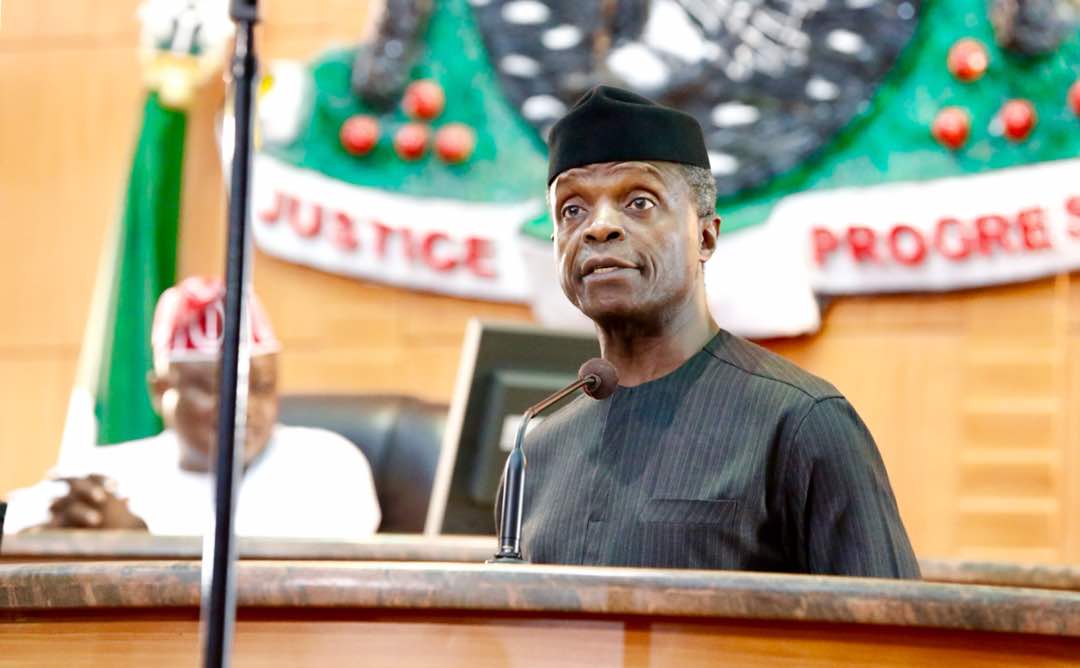 Vice President Yemi Osinbajo has advocated for strong and autonomous states as a panacea for eradicating poverty in the country.

Osinbajo stated this, while delivering a lecture at the special parliamentary session in commemoration of the 3rd Anniversary of the 8th Assembly of Lagos State which took place at the chamber of the Lagos state House of Assembly Alausa on Friday June 29th.

Although the topic for the lecture was ‘Strengthening Legislative Institutions: Panacea For Enduring Democracy,” the Vice President narrowed the topic down to ‘Stronger State and The Eradication of Poverty.”

As against the general belief that the creation of a conducive environment by the government for business to thrive would checkmate mass poverty, Osinbajo said that poverty could be eradicated by having strong states with strong judiciary, executive and legislature, which would channel the resources of the state to create wealth for the citizens and eradicate poverty.

“The three arms of government in the states must work proactively for the economic development of its citizens. To achieve this, there must be devolution of powers to the states to enable them control their resources,” Osinbajo said.

He cited the great feat achieved by the late sage, Chief Obafemi Awolowo, saying that as Premier of the then Western region Awolowo recorded achievements that were acknowledged worldwide and most of which has remained enduring as the government then relied solely on revenue from taxes and cocoa.

Osinbajo submitted that although he supports devolution of power and restructuring, but that even without restructuring it is possible to create strong states without any major constitutional changes.

He recalled how collaboration between the the three arms of government in Lagos right from the reign of Asiwaju Bola Ahmed Tinubu to the present governor the state has been able to win series of cases at the Supreme Court, which has given more powers to not just only Lagos State, but which has benefited so many other states.

According to him, the Lagos State House of Assembly has pushed the frontiers of federalism by passing laws, which have strengthened federalism in Nigeria.

He advised that for outstanding economic growth there is need to focus more on education, healthcare and provision of jobs through delibrate programmes and pumping of more resources to these sectors to benefit the majority of the citizens.

The Vice President disclosed that the present government is working round the clock to create an environment for business to grow, especially a micro credit scheme for those at the lower rung of the economic ladder to lift them out of poverty.

He commended the Lagos State Government for creating exemplary institutions for economic growth and development.

Osinbajo also made a case for state police to tackle the present security challenges confronting the nation, saying that “local policing is very important as part of security architecture”.

In his remarks, the Governor of Lagos State, Mr. Akinwunmi Ambode praised the leadership of the state Assembly for team dynamics and infrastructural development within the Assembly.

According to him, the three arms of government in the state have always worked together and have strived to show a good example of the tenents of democracy and what growth and development should be “and with that collaboration we will take Lagos to where it is suppose to be.”

In his welcome address earlier, Speaker of the Assembly, Rt. Hon. Mudashiru Obasa said in that three years the Assembly has passed 28 bills into law and over 100 resolutions covering important areas such as education, health, power, transport, security and environment and others for the well-being of the people.

Obasa commended Ambode for “the good job he is doing, which is visible all over the state. He has turned the whole state to one construction site.”

While stressing on the important role of the Assembly in democracy, Obasa said that the executive should ensure the survival of the legislature by playing the role of a father and ensuring cordial relationship to avoid instability and anarchy.