PROTEST: GROUP IMPLORE LAGOS ASSEMBLY TO ENFORCE RESTRICTION ON MOVEMENT OF TRAILERS IN THE STATE

Lagos State House of AssemblyMediaPROTEST: GROUP IMPLORE LAGOS ASSEMBLY TO ENFORCE RESTRICTION ON MOVEMENT OF TRAILERS IN THE STATE 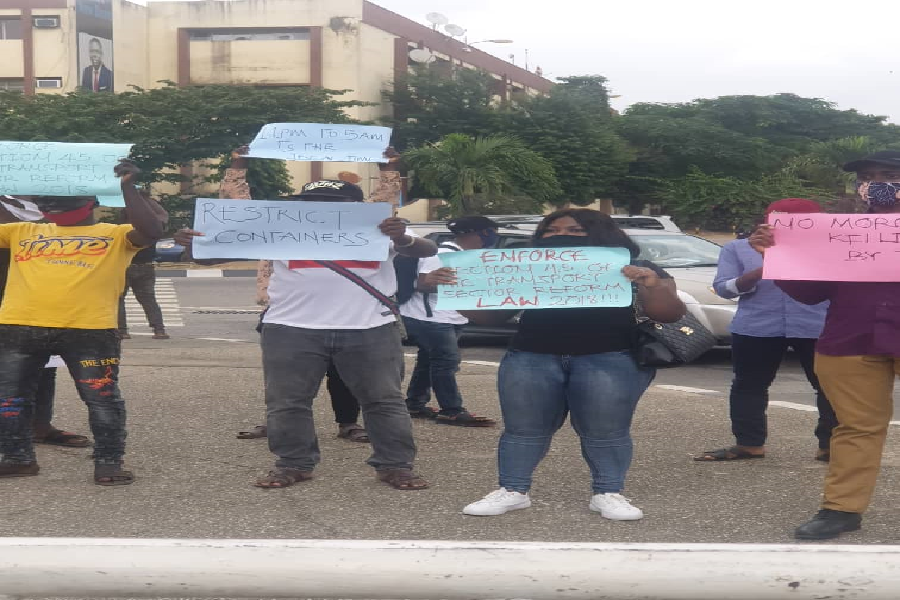 PROTEST: GROUP IMPLORE LAGOS ASSEMBLY TO ENFORCE RESTRICTION ON MOVEMENT OF TRAILERS IN THE STATE

Members of the Lagos State House Assembly, on behalf of the Speaker, Rt. Hon. (Dr.) Mudashiru Obasa, received a peaceful protest by the Profer Organization led by Miss. Oluwatodimu Bankole on Thursday at the Assembly complex, demanding for the enforcement of restricted movement hours of containers and other articulated vehicles in Lagos State to the hours between 11pm and 5am.

The protest was aligned with the death of one, Miss Chidinma who died in an accident on the 24th of July, 2020. The accident was said to have been caused by a 20 feet container which had fallen on the commercial bus she boarded and led to four people injured, including one other dead.

Miss Oluwatodimu Bankole while presenting the protest letter to the Lawmakers, expressed their pains over the loss of their loved ones, asking for enforcement on the restrictions of the movement of these vehicles so as to reduce the risk of losing more innocent Lagosians.

She explained that before the accident, Miss. Chidinma was a campaign activist on the need to restrict the movement hours of these Trailers (containers) in Lagos State; “It was almost as if she was asking for her life to be saved before she was killed by same”. She said

“The logistics behind creating new routes for these vehicles or their complete removal is understandable. Nonetheless, if such vehicles cannot be completely removed or rerouted, it is possible that their movement be restricted, ideally between the hours of 11p.m to 5a.m.”

She appealed on behalf of the self-driven, hardworking and tenacious people of Lagos that the House address the killings of innocent Lagosians by these containers, tankers, trailers and trucks in the State.

Hon. Victor Akande who addressed the protesters, condoled with them over the loss of their loved ones and went ahead to express his pleasure over their peaceful demonstration. He assured them that the Speaker would look deeply into the issue and treat it with most urgency and of topmost priority as the protection of lives and property is the sole aim of every government.

He added that the life of every Lagosian should be protected as best as possible through enabling Laws which is what the Lagos Assembly stands for.

They were received by Hon. Victor Akande, Hon. Rauf Age-Sulaimon and the Clerk of the House, Mr. Azeez Sanni.