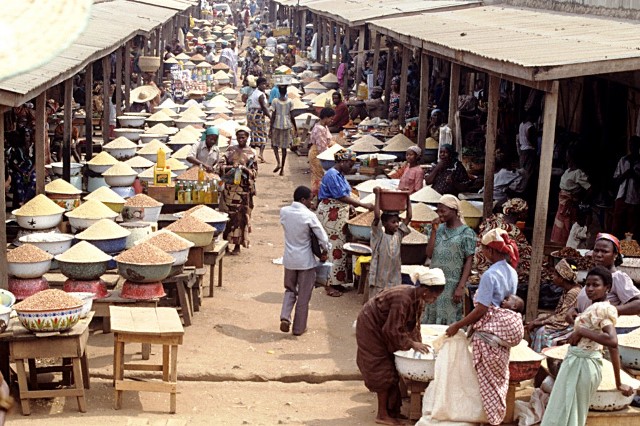 Not a few market women and men stormed the premises of the Lagos State House of Assembly on Tuesday over an alleged plan of the state government to demolish Ojodu Retail Market.

The distraught marketers chanted several solidarity songs, and passionately appealed to the Speaker of the Assembly, Rt. Hon. Mudashiru Obasa to use his office to help them stop the state government from implementing the policy.

Leader of the protesters and Treasurer of the Market Men and Women, Ojodu Retail Market Branch, Alhaja Fadeke Bello disclosed that the marketers were surprised when some officials of the state government gave them only one day notice for the demolition.

Bello said in an interview that she stood in for the Iyaloja of the market, Alhaja A.A Adegbola, who she said went for a weekly meeting of the Iyalojas in the state.

“We are here on behalf of the people of Ojodu Retail market. We heard that Governor Akinwunmi Ambode ordered the demolition of parts of the market, which we did not agree to because the notice was short.

“They called us for an emergency meeting yesterday that they were coming today to demolish the market and we told them that we could not accept that because of the short notice.

“This was why we decided to come and inform the Governor, Speaker of the Assembly and our Iyaloja General, Alhaja Folashade Tinubu-Ojo.

“We are going to her office to see her now. They told us they would only demolish part of the market, but we don’t know what they would do. They gave us a short notice,” she said.

The woman revealed that the market belongs to Ikeja Local Government and that it was established 32 years ago by the Marketing Board.

She stated that they were later told that there were issues with the owners of the land, while appealing to the government not to send them away from the market.

According to her, Governor Akinwunmi Ambode is trying his best for the beautification of Ojodu Local Government, adding that they also want to enjoy the gesture of the government.

“The Governor should not send us away from where we earn our daily bread. We depend on the market for survival. We don’t know their plans about the market, but we want them to help us,” she stated.

Addressing the protesters later, Speaker Mudashiru Obasa urged them to be peaceful with their protests, promising to get across to the Executive on the matter and report to the leaders of the protesters in due course.