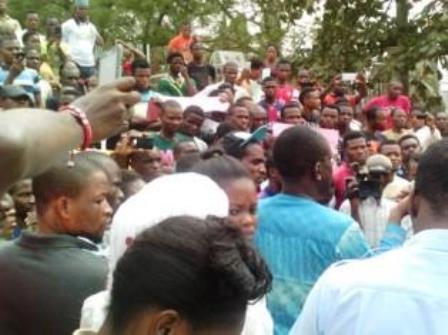 Rights activists under the aegis of Human Rights Defenders and Advocacy Centre (HRDAC) on Thursday stormed the Lagos State House of Assembly, Alausa protesting abuse of human rights and calling for prosecution of security agents concerned.

The group, in a petition addressed to the Senate president, National Assembly Complex, which it handed over to the speaker of the Lagos Assembly for onward transmission to the senate president, demanded the immediate release of the detained Shiite leader, El-Zak Zakky, the former National Security Adviser to former President Goodluck Jonathan, Sambo Dasuki and Umar Mohammed as well as the prosecution of the Nigeria security operatives responsible for the killing of Biafra and Shiites protesters.

In the petition signed by the President of HRDAC, Comrade Queen Rose Ameh, the group said it is worrisome that security operatives in the country under democratically elected government will be on rampage killing unarmed Nigerians without caution and the lawmakers are silent over it.

“The brutality has been wanton, even our colonial masters never went on rampage to kill our citizen when we were fighting for independence in this magnitude. The security operatives killed more than 1000 Shiites and 300 Biafra protesters. It is unheard of to kill unarmed people in this magnitude.

“Of recent there was protest against the president elect of the most powerful nation in the world, Donald Trump and we never heard that protesters were killed. But in Nigeria, because the Chief of Army Staff was blocked from passing through, the Nigeria Army had to regroup to go and kill people in their houses as if they are not Nigerians, and even in wars, there is rule of engagement but surprisingly we have observed that our lawmakers kept silent, as if you don’t know your responsibility.

“During the Jonathan era, if you could remember, this same security operatives ambushed the National Assembly and stopped lawmakers from accessing their offices. If you don’t do anything to stop this excess it will soon be your turn. An injustice to one anywhere is an injustice everywhere”, they said.

HRDAC condemned the continuous detention of El-Zak Zakky, Dasuki, Umar Mohammed and demanded their immediate release, adding that the constitution states that personal liberty should not be breached for more than 48 hours without being charged to court. According to them, “all these people have been in detention going to a year now. This is the constitution that you are a product of and swore to uphold”.

Stating that the offence is an impeachable offence against the President, the group called on the senate to commence the process of impeachment against the president.

“This is an impeachable offence against Mr. President which we believe under the check and balance system you should proceed to impeach Mr. President. We shall be giving you one week to accede to our demand, failure to we shall be staging continuous protest to the National Assembly until our demands are met”, the group said.

Responding on behalf of the speaker of the Assembly, Hon. Funmilayo Tejuoso, Chairman, House Committee on Judiciary, Human Rights and Public Petition assured the protesters that the Assembly would forward their petition to the National Assembly and urge the legislators there to look into their grievances. She also thanked the group for having confidence in the Assembly and for coming peacefully to present their case.