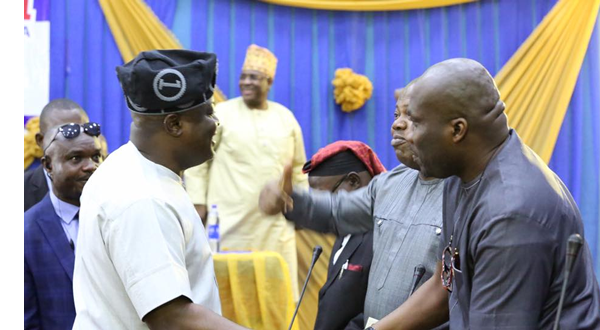 Security concerns dominated the 2nd Edition of the Lagos State House of Assembly/Media & Civil Society organisations parley which took place at the Assembly premises yesterday with many of the participants calling for state police.

The participants said that the menace of Badoo, kidnappers and falling containers was giving Lagosians a lot of concern and that there is palpable fear among citizens as a result of these threats to the lives and property of Lagosians.

The parley, which is the second in the series, was organised by the Assembly according to chairman of the house committee on information, Tunde Braimoh for the purpose of briefing the media and civil society on how far the Assembly has fared in the last two years and also foster relationship with them.

It had in attendance Editors and Managing Directors from both print and electronic media, online and other social media practitioners as well as officials of civil society organisations.

Muyiwa Akinpelu, Publisher of Global Excellence advised the Assembly to lobby other state Assemblies to agitate for state police as a way out of current security challenges. Others expressed the same sentiment.

In his address earlier, Speaker of the state Assembly, Hon. Mudashiru Obasa thanked God, Lagosians and his colleagues for their support in the tasking job of the House.

He also recognised the role of civil society organisations and the media in the achievements recorded by the Assembly in the past two years.

According to him, in the last one year the House has passed eight bills into law with others at various stages, while it has also passed 72 resolutions “all bordering on welfare of Lagosians particularly security.”

“Among these laws are: Neighbourhood Safety Corps Law; Kidnapping prohibition law; Lagos Property Protection law; Environmental Protection law amongst others to tackle security and other problems in the state”.

“Lagosians have benefited from all these laws and we shall not rest on our oars. We have also held MDAs to account through effective and efficient oversight functions”, Obasa said

While recognising the contribution of the press and CSOs to the achievements of the Assembly, the speaker said, “the press has significantly contributed to democratic sustenance in Nigeria”, and appealed to the press to continue to partner with government and the legislature to deliver dividends of democracy to the people.

He urged them to rise to safeguard the legislature pointing out that about six speakers of state Houses of Assembly were recently impeached under questionable circumstances. “To sustain democracy we must protect the legislature”, urging them to be objective and magnanimous in their criticisms.

On the call for state police, Obasa said the conference of speakers of state Houses of Assembly in the country starts today in Lagos promising to work with other state legislatures for state police to become a reality” because no state today is spared of security challenges”.