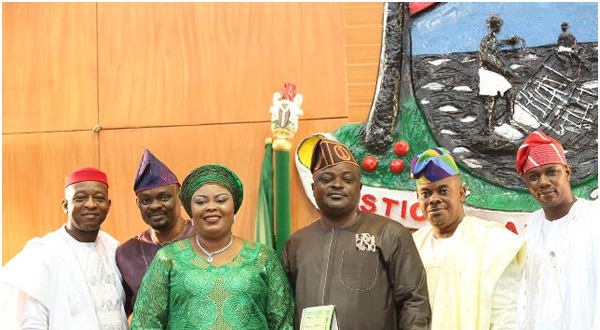 Six out of eight PDP lawmakers at the Lagos State House of Assembly on Thursday officially announced their defection to the ruling All Progressives Congress (APC) citing outstanding performance of Gov. Akinwunmi Ambode among others as their motivation for the decision.

The defection was announced through a letter addressed to the Speaker of the House, Rt. Hon. Mudashiru Obasa titled “Letter of Defection from PDP To APC” and dated 16th February, 2017 and signed by the defectors excluding the Minority Leader, who announced his defection on the floor of the House.

It had been reported in some sections of the media on February 7 that six out of the eight PDP lawmakers in the assembly were set to defect to the ruling APC.

The two lawmakers left in the opposition are Hon. Victor Akande ( Ojo I) and Hon. Oladipo Olorunrinu (Amuwo-Odofin I).

Blazing the trail, Famakinwa said: “My reason to jettison the PDP was borne out of the monumental achievements of Governor Akinwunmi Ambode of the state.”

Also announcing his defection, Oluwa said: “My reason for joining APC is due to the fracas between Senator Ali-Modu Sheriff faction and Alhaji Ahmed Makarfi faction of the PDP.

“I admire the leadership style of the Speaker of the House, Rt. Hon. Mudashiru Obasa and Governor Ambode.”

Idimogu said: “I appreciate the kind of relationship that we have here. I must confess that I am in love with Governor Ambode. The Governor has been kind to me and my constituents despite the fact that I was formerly in the opposition.

“APC is better. I don’t know how to appreciate him (Ambode) than to join his party to move the state forward.”

According to Sokunle, the decision to align with the ruling party was borne out of the desire to move the state, especially his constituency forward.

The only female lawmaker among the defectors, Hon. Sangodara, said that she took the step so as to serve her constituents better, saying ‘we are all aware of what is happening in PDP.’

While welcoming the defectors, Obasa said: “For the fact that these people have joined us, let us welcome the defectors. There is a pleasure in dumping PDP.”

The other lawmakers took turn to welcome the defectors into the APC and exchanged pleasantries with them.

The Majority Leader of the House, Hon. Sanai Agunbiade said in his contributions that “No reasonable man will continue to live in a house that has given signs of collapse. The defection is a welcome development.

According to Hon. Olanrewaju Ogunyemi, the Chairman, House Committee on Education, the defecting lawmakers deserve commendation for their courage to stand up for what is right.

Hon. Yinka Ogundimu said: “The decision is noble and historic and it is a welcome development. It shows that the head of the assembly has led well. It means there is a good manager at the helms of affairs.”

The Chairman, House Committee on Information, Strategy and Security, Hon. Tunde Braimoh, said that the speaker’s dutifulness, responsibility, solidarity and fraternity made the defection possible.

The two lawmakers left in the opposition, Hon. Akande and Hon. Olorunrinu also commended the performance of Governor Ambode and leadership style of Obasa, while wishing the defectors well in their new party.