Stakeholders Harp On Prevention of Cancer 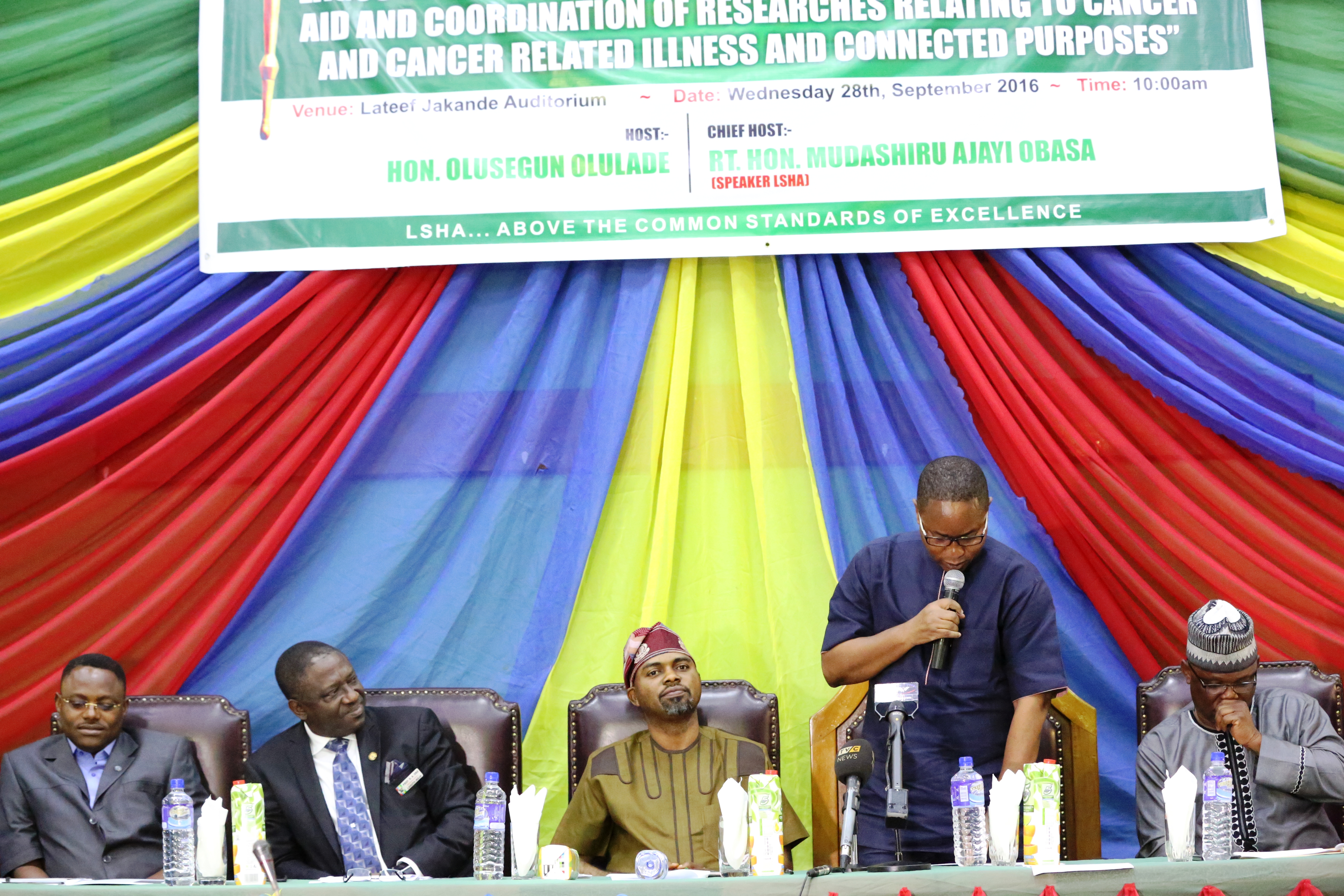 Stakeholders Harp On Prevention of Cancer

Stakeholders at a public hearing on a bill for a law to Establish Lagos State Cancer Institute To Provide For Promotion, Aid And Co-ordination of Researches Relating To Cancer And Cancer Related Illness And Connected Purposes by the Lagos State House of Assembly have emphasised the need to prevent the disease.

Speaking at the public hearing, which held at the Lateef Jakande Hall on Wednesday, the stakeholders stated that the Nigerian government is not known to be keen about sponsoring medical researches, but that cancer, which is a terminal disease, could be prevented.

The ball was set rolling by the immediate past Majority Leader of the House, Dr. Ajibayo Adeyeye, who observed that Nigerians used to travel to India to seek medical treatment for cancer.

He added that treating cancer is not cheap and that it is a tertiary problem, adding that the Lagos State University Teaching Hospital (LASUTH) has a research institute for cancer.

“The Bill should be amended to make it part of the hospital’s research institute as creating another structure would put pressure on the already lean budget of healthcare of the state.

“A lot of people would be employed to man the centres to be created and the state government cannot afford this,” he said.

Also speaking, another participant, Mr. Wale Adegbite stated that the government hardly sponsors researches and that they could not be depended upon on an issue like cancer.

This view was supported by the Medical Director of Gbagada General Hospital, Dr. Lawal, who said that prevention of cancer is better, adding that cervical cancer is preventable.

Also, the Medical Director of Apapa General Hospital, Dr. Adewale Adebajo stated that it is cheaper to prevent cancer than to treat the disease, and suggested that the government should make it mandatory for the people to screen for cancer.

This was also suggested by Professor Atilade, who said that a lot of money is being spent on cancer, but that preventing the disease should be embraced, and that alternative medicine should be encouraged to treat cancer.

The Chief Executive Officer of HOPE, Mrs. Ebunola Anozie also submitted that there should be a comprehensive cancer centre, where issues relating to the disease would be handled so that more awareness would be created about the disease.

“There are so many NGOs that advocate early detection of cancer and we need a comprehensive cancer research centre to treat the disease,” she said.

The Speaker of the Assembly, Rt. Hon. Mudashiru Ajayi Obasa, who sponsored the Bill and who was represented at the event by the Deputy Speaker, Hon. Wasiu Sanni Eshinlokun, said in his keynote address that the Bill was necessary to check the disease and make it easy for cancer patient to access treatment.

Earlier in his speech, the Chairman of the House Committee on Health, Hon. Segun Olulade had said that the Assembly was the the first to come up with legislation that will cater for the promotion, aid, and coordination of researches relating to cancer.

“I say this because we have never had such a thing in Nigeria. What we have had are private institutions coming up with research centres and some other individuals coming up with NGOs. Now is the time to get it right when it comes to issues relating to cancer.

It has become a tradition in this House of Assembly for us to always invite stakeholders to make inputs before we pass any bill into law. We believe this will make us have a nearly perfect and robust law that will be of great benefit to every resident of the state. Therefore, I must confess that this hearing couldn’t have come at a better time than this critical time,” he said further.

According to him, it is a known fact that cancer is a very deadly disease, which has claimed so many lives in recent years.

He added that many forms of cancer including breast cancer, cervical cancer, oral cancer and colorectal cancer can be cured if detected early, adding that diet and lifestyle play a very crucial role in causing cancer, “thus it is important to maintain a healthy lifestyle and also go through regular medical check-ups,” he enthused.