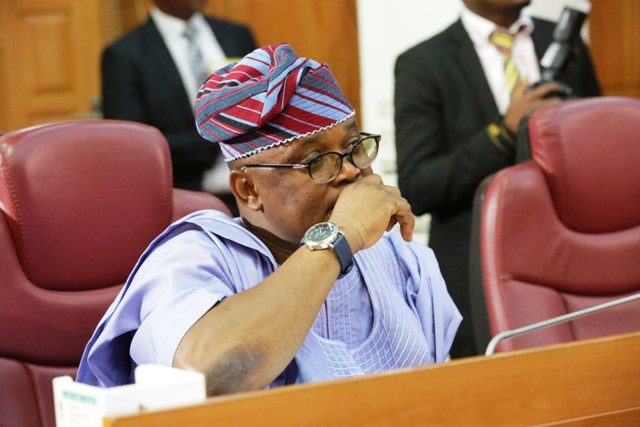 The situation of the country, especially as it concerns the current revelations of high-handed corrupt practices is a concern to the Majority Leader of the Lagos State House of Assembly, Sanai Agunbiade. He stresses that much in this interview.

Q: What is your opinion about the arms fund deal involving former National Security Adviser, Col. Sambo Dasuki (rtd.) and others. What lessons do you think we have learnt from this?

I want to thank and appreciate God for intervening in the affairs of this country. It was God’s intervention that agitated the mind of our National Leader, Asiwaju Bola Ahmed Tinubu, who became revolutionary about our political process and had the confidence that the progressives could wrestle power from the conservative elements. He propounded the theory of amalgamation of all progressive elements, telling them it was possible for the progressives to come together and wrestle power. It was God’s intervention that touched the minds of those that came together and which allowed the convention of the All Progressives Congress (APC) to choose now President Muhammadu Buhari as their presidential candidate without the magnitude of the disagreement and rancour that was expected. The formation of the APC was God’s intervention, where different set of people buried their ego and resolved to work together. It was God’s intervention that sustained the APC despite all the efforts of the then Peoples Democratic Party-led government to scuttle the formation of the party. You remember another APC came up. And the election itself was God’s intervention and President Buhari won. It is God’s intervention in the political affairs of the country that PMB won; if not, by now Nigeria would be down in the mud. If you look at the impunity with which things had been done culminating in the deafening figures, billions of naira for very trivial things, biliions of naira for ridiculous things, dollars for criminal activities to fund aggression and revolt against the state, you will marvel. Some of the revelations shows that somebody was giving hard currencies to the insurgents. You can imagine a situation, where billions of naira was allocated for prayers, for advertisements, publicity, where the treasury was made available for a candidate of a party. You can hear a very provoking revelation. Imagine if government had returned into the hand of these people, the series of revelations now would have been buried forever and another round of economic sabotage would have commenced pushing Nigeria into a grave. That is why it beats my imagination, when some people still accuse President Buhari of non-performance. How can anybody perform with the kind of doldrum, which the Nigerian economy has been pushed into? You want the man to hit the ground running when the ground is not solid, but murky? So, the present revelation, prosecution, accusations and counter accusations are only telling Nigerians that they should be appreciative of God, who has changed the cause of events to allow people, who would expose the crime that have been committed against Nigerians in the last four years. I want to praise the dexterity, the commitment, the doggedness of Asiwaju Bola Ahmed Tinubu and that of the national officers of the APC and all individual members that participated in the revolution that ousted, through the ballot, the regime of Dr. Goodluck Ebele Jonathan. I am sure in the corners of his room, Jonathan would now have realised that he was surrounded by people, who never wished him well, by people who were political scavengers feeding fat on his political disposition. That is to tell you that he who must lead should be a firm person, who has track record of managing men and resources. It is not enough for an academia to jump on the train of politics and aspiring to steer the wheel. Those who would surround him would want to drive the train aground. My own subsmission is that God is passing through Nigeria and at the end of the day, appreciative minds would see God’s grace in this.

Q: The PDP has said that in fighting corruption President Buhari must also probe the source of funding for his election campaign. What do you think about this?

A drowning man would look for the slightest object to hook up to. One thing at a time and that done well is a very good route to others. You cannot be a judge in your own case. They are two different things, there are some monies belonging to the Federal Government of Nigeria alleged to have been misappropriated by persons who possibly should not have been involved in the ways and manners the monies were spent. That is being carried out by the present government; let that process continue to a logical end. If the PDP have their proofs, let this be resolved and they can tell him: “Mr. President, you have successfully fought and won, this is a battle you should also fight, we have our fight.” Why is it that it is when the government started probing people, not on the basis of political affiliation, but base on certain fact emanating from certain revelations or people who are aware of such transactions that they are bringing this up or do they think that Buhari just dreamt about this? People started to talk, people that were disenchanted about the way things were being done, but could not talk. Any individual in whatever capacity that is opposed to what President Buhari is doing now should be seen as an enemy of Nigeria. When the monies are recovered, would it not be for the use of Nigeria and the common man?. Is it enough to say: “okay, we agree that we stole, didn’t you steal?” They should cover their eyes in shame and apologise to Nigerians that majority of the people being alleged now are members of their party, and they were in the corridors of power then.

Q: How can we avoid this kind of thing both at the federal and the state levels?

The only way is to carry this prosecution to conclusion. Whoever is found guilty should be dealt with according to the law.
Q: Recently, state governors said they could not continue with payment of N18,000 minimum wage and that it is either they reduce the amount or retrench workers. What is your take on this?

My opinion is that a very delicate situation requires a very a careful approach. We are all witnesses that the present situation is due to the way our economy had been managed. You could imagine if all these billions of naira are to remain within the economy, I am sure the economy would not be as bad as it is. So, in fixing Nigeria, we have to be careful not to create another problem. We are still talking about the creation of states. To create a state, we have to look at the viability of that state. We should look at the economic potentials of that state. We have created these ones, we have to sustain them. The Federal Government came out with bail-out funds for the state; one way or the other it has solved some problems. We need to look at our situations and come out with workable solutions. To retrench might not be a palatable option in the face of economic hardship in the country. To retrench is to throw more capable hands into hopelessness and to heighten the apprehension in the society and to increase the likelihood of the dangers that unemployment constitutes to the society. As much as it is difficult for the states or some states to pay the minimum wage, I am sure that for every problem, there is a solution and every problem comes with a solution. If you look deep into every problem, you would find a solution. I want to sympathise with the states that are not too viable to pay wages, but I would not subscribe to retrenchment because of the dangers it portends. So, in-between ability to pay and the danger of retrenchment, they should find a solution. It is sure that God that has been with Nigeria would open our eyes to a way out. But we need to look deeper to be able to come up with a strategy that would bring us out of the dangers of retrenchment and the ability to pay minimum wage.

Q: How do we get out of the economic doldrum you mentioned earlier, in the face of dwindling price of crude oil?

We will not be the only country that is affected, other countries are coping. When a problem befalls you, we should be able to cope and adjust, but when a problem befalls you and you are now generating another problem from within, then it would be catastrophic. If we can curtail the level of corruption within the system, I am sure we will be able to adjust to any economic hardship that is starring us in the face. Whatever happens, whatever global recession that happens, it would not affect only Nigeria. We should be able to mitigate any problem that might affect our development. Why are we not having electricity, constant electricity? Is it not from the mismanagment of our affairs? Due to lack of electricity, many companies have folded up and thrown people into the labour market. The young elements that are graduating from the universities can’t get work. Of course, the first law of nature is self survival. They would now look for any means which could be crime or any other negative way to survive. But, let us just fix electricity and have 24-hour light, you would see our economy bouncing back. That means our refineries would work, all these things about crude oil and refined oil would be eliminated. That means our industries and companies would produce at optimum capacity, and more people could be employed and the country would be safer to attract investors and Nigeria would be more creative because the beauty of Nigeria would show at night. Some people would work in the morning, others in the afternoon and at night. The society would be safer, more beautiful, more jobs and less crimes and our economy would be safer. Let us remove corruption and see our beautiful Nigeria is.

Q: What should your constituents expect in 2016?

The year 2016 will be a year of prosperity for Nigeria, Lagos State and Ikorodu Constituency 1. In 2016, I want to redouble my efforts in justifying the mandate of my people for the third term. It is a special privilege and I want to justify the trust they reposed in me to give me this mandate. I will continue to represent them with all commitments, dedication and good hearts. In 2016, I want them to expect more grace of God because there is nothing anybody can do unless it is from above and because God sees my heart, my intentions, I know He would strengthen me, embolden me and give me more grace to be able to represent them. I have not disappointed them, I would not disappoint them, I want to do more to attract more government presence to my constituency. On my own part, I want to continue to render humanitarian services and give back to my community for the mandate they have given me. I would do more of empowerment for my people, I would represent them and see how more people in my constituency would be empowered with employment, skill acquisition, how much I can collaborate with my people to restore peace and stability in my constituency. I want to assure them that by 2016, the incessant crisis of land grabbers (ajagungbales) that proliferate our society would be seriously addressed by the state government and brought to the barest minimum. By December 2016, I am sure a lot of people in my constituency would do thanksgiving to God for improved standard of living economic condition in the name of God.