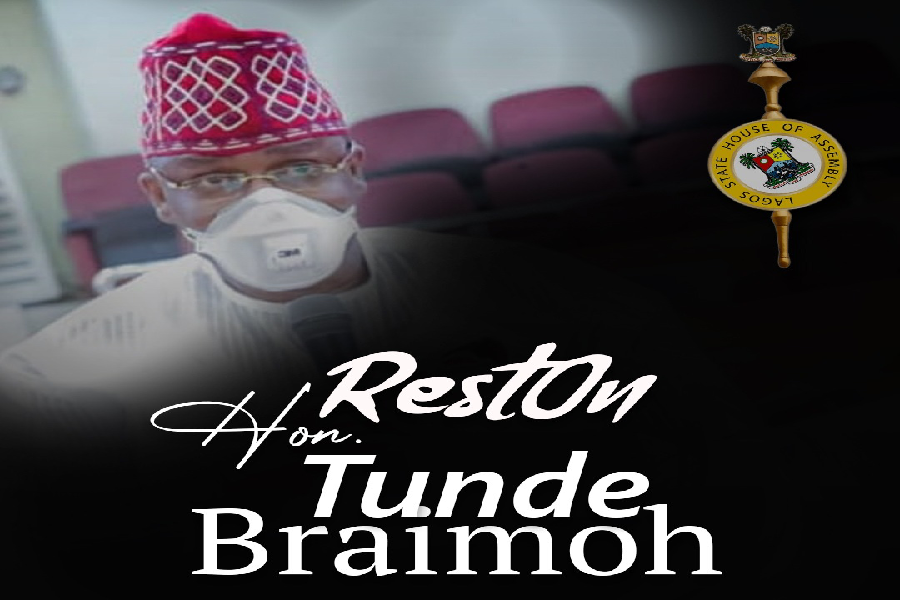 It has been over 24 hours, yet I am still in search of the right words to portray how I feel currently. It did not come like a lightening. No. It hit like thunder. Maybe. Maybe worse than that. Or how best can one describe the blow death brought upon us with the sudden demise of Hon. Tunde Braimoh? How best can I understand that one backbone of the Lagos State House of Assembly has been expunged, not even like something taken away temporarily to be returned someday? How best can I pull myself together knowing that we will not see this scholarly politician whose meritorious service has added to the gains of Lagos?

As I sit quietly, ruminating about our journey on this earth, how we became close pals, the circumstances that brought us together, Briamoh’s unique voice, his brilliant arguments and postulations, his sequence and enviable use of words that sometimes got us bursting with laughter and respect, his gait, his carriage, then the reality that none of these would be heard or seen again, I melt with thick sweats on my forehead. Can our tears cease?

Two times I have tried to put something together within the last 24 hours. Yet, same two times I have been at a loss for what to say.
Tunde Braimoh was not just a lawmaker, he was an ally, he never had ‘no’ for an answer. He knew what to do even before such was brought to his attention. He had a ready answer for all questions. I remember the many times he would walk up to me to tell me about issues. A constant characteristic was that he solved most of them before I got to know.

Yes, he was not perfect; he was a human being like all of us, but who can judge him when his good deeds, which are unquantifiable, are there before everyone? There is no doubting the fact that he touched lives personally and on behalf of the House of Assembly. He had feelings for the downtrodden – they benefitted immensely. In everything he did, he always placed himself in the shoes of the other person.

He was neat, his dress sense was unique. He was always careful with life and he took his health as a priority. His laughter still rings. I can’t imagine – and do not even want to – that in our next sitting, we would all be greeted by an empty seat without that handsome, tall and gallant man, whose brilliance was never in doubt.

This is truly a blow to us.Hon. Braimoh had plans, great ones, for Lagos State. He had shared some with me. He also always had his constituents in mind constantly thinking of how best to reach them and give them reasons to be happy.

This year 2020 has shown its troubling uniqueness. Between June and July, we lost two strong pillars. We were still grappling with the reality of the demise of Senator Sikiru Oshinowo, whose valedictory session Braimoh played a role in as the Chairman of the House Committee on Information, Security and Strategy.

We will be consoled by the fact that the late two-term lawmaker served his State and the Federation of Nigeria with his might and intelligence and contributed immensely to their advancements. But, again, our hearts will continue to grieve. Rest on, dear brother and friend.

Rt. Hon. Obasa is the Speaker of the Lagos State House of Assembly and Chairman, Conference of Speakers of State Legislatures of Nigeria.