We Will Scrutinize The 2018 Budget Estimate For Adequate Performance – Obasa 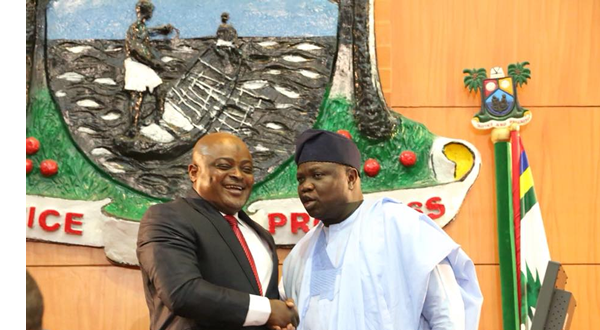 We Will Scrutinize The 2018 Budget Estimate For Adequate Performance – Obasa

Speaker of the Lagos State House of Assembly, Rt. Hon. Mudashiru Obasa has promised that the House would properly scrutinize the budge estimate of Year 2018, which figure was given as N1.046 Trillion.

In his speech during the presentation of the budget tagged “Budget of Progress and Development” by Governor Akinwunmi Ambode of the state on Monday, Obasa assured the people of effective oversight by the lawmakers.

“This House will not rest on its oars of scrutinizing this Budget to deliver on its promises in meeting the aspirations of the people.

“As usual, we are duty-bound to painstakingly look at the nitty-gritty of the budget for the purpose of transforming same for the benefits of all Lagosians.

“I assure you that this House, through effective oversight, will ensure that the Year 2018 budget deliver on its promises to stimulate the economy of the state by focusing on infrastructure development, delivering inclusive growth and prioritizing the welfare of Lagosians towards making the budget spell out its theme to the letter,” he said.

Obasa used the opportunity to commend the Governor for the completion and commissioning of Abule-Egba and Ajah state-of-the-art flyovers.

The Speaker added that with the feat achieved by Governor Ambode merely two years in office, there is no doubting the responsiveness and readiness of “this noble House to continue to support the state through passage of people-oriented and development-focused legislations.

“We are poised to cooperate with the Executive to develop an economy that is sustainable, smart and knowledge-based, and whose commitment to law and order is unequivocal,” he stated.

Others were given as capacity building for all civil and public servants, teachers and health workers; completion of housing estates; commencement of health insurance scheme among others.

He however, urged the Executive to see all the three arms of government as one, saying that it is obvious that working as a team will ensure prompt service delivery.

He said: “Working together, as we can see in the last two years, brings smooth effective administration. This is rightly put by Prof Ola Rotimi in his play Ovonramwen Nogbaisiand I quote: “the eyes and the nose are one; when one is hurt, the other shed tears.”

In his comment, the Acting Chairman of the House Committee on Budget and Economic Planning, Hon. Rotimi Olowo stated that the state government would focus more on blocking all loopholes in tax collection.

Olowo stressed that a lot of people have either been evading taxes or underpaying taxes unlike what obtains in civilised societies.

He added that efforts would be made by the state government in conjunction with the House of Assembly to give the people the dividends of democracy.

Also speaking, the Acting Chairman of the Public Accounts Committee (PAC) Local, Hon. Bisi Yusuff said that budget is not a guess work and that the Lagos State Government would realise the budget estimate for the year.

“Once you do something good, the people would comply with your directives. Budget is based on empirical research and I can tell you that N1 Trillion is not too much for the state government to achieve in a year.

“If people say that are not satisfied with the performance with the government in 2017, even God does not satisfy people, they would still have complaints. I want to say that the state government has been able to do its best to satisfy the people,” he said.

The lawmaker explained that the state government was not able to do some of the road projects promised to be done across the 20 local governments and 37 Local Council Development Areas (LCDAs) in the state due to the constraints of rainfall.

On the focus for the 2018 Budget, Yusuff advised the state government to emphasise on road construction, healthcare and youth development as well as empowerment.