What We Need Is Brand New Constitution, Not Amendment – Agunbiade 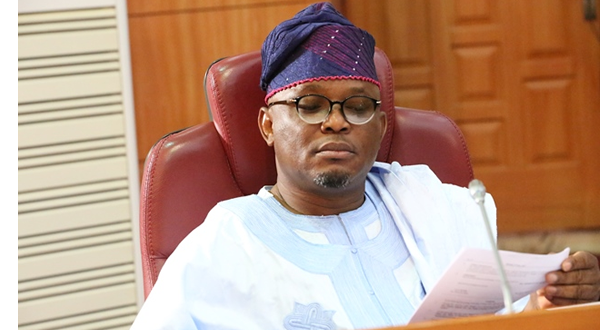 What We Need Is Brand New Constitution, Not Amendment – Agunbiade

While the National Assembly believes that the 1999 Constitution being operated by the country should be amended, the Majority Leader of the Lagos State House of Assembly, Hon. Sanai Agunbiade believes that what the nation needs is a brand new constitution.

In an interview he granted us recently, Agunbiade, who happens to be a lawyer and a representative of Ikorodu Constituency 1 in the assembly, added that even in amendment is desirable, a totally new constitution is more preferable to the people.

He addresses this and other matters in the interview.

Some sections of the Nigerian Constitution were recently amended by the National Assembly. Would you support this or you prefer a brand new constitution?

A lot of people have been advocating for a new constitution, where ethnic nationalities and interest groups would come together to determine how we should be governed. The constitution being the ground norm of every society should derive from the people. But what we have currently is a product of a decree during military dispensation.

Military dispensation is itself an abberation, which is preached against by Section 1 of the Constitution itself, which says that nobody shall take control of the government of the country except as provided for in the constitution. The constitution provided for democratically elected leaders in all spheres. So, for the military to have come to power and hijack democratic process is illegal.

For those illegal group of people to now try to impose a democratic arrangement on Nigeria through the constitution is what some Nigerians are now saying is wrong as you cannot build something on nothing. That is why they are saying that what we need now that the Nigerian democracy is becoming stable is to agree to sit together and come up with a new constitution that is derived from the people instead of the current constitution, which unfortunately was given birth to by the military. They started it by saying, ‘we the people of Nigeria.’ You cannot use a legal affirmation to bring out illegality. The foundation of every structure is important.

As it is, people are saying that there is nothing wrong with the current constitution, what we have problem with are the operators of the constitution. I mean those, who are making things difficult. When you do the necessary amendment and it is properly pursued, it would bring out sanity.

In the current amendment by the National Assembly, efforts are being made to thinker with the age prescription for different elective offices by reducing the ages to accommodate the youths. They reduced the ages for some elective offices from 35 to 30, from 30 to 25 and so on like that. It is only the one for the senate that is left at 35 because in the absence of the President and the Vice President of the country, the Senate President would come in. So, if the prescription for the office of the President is 35 years and that of the Senate is lower, it would be dangerous because anybody can be Senate President. So, if somebody is 30 years old and he assumes the office of the Senate President, if anything now happens to the president and his vice, then there would be a constitutional problem if the Senate President is to act as President. I know the issue of independent candidacy, accounts of the state and the federal governments and the issue of treating the local government as a government on its own and given more political offices to women were discussed. However, a critical area like fiscal federalism has not been touched. They actually tried to devolve power to the state by removing some powers from the exclusive list to the concurrent list. That is reducing the power of the Federal Government. What of fiscal federalism, where much money is given to the Federal Government and the federating states are given little money. We are saying that they should weaken the financial power of the federal government and give more fiscal power to the states that are closer to the people. The federal government should just be playing a kind of supervisory role. Fiscal federalism would allow the statea and the local governments to have more allocations. So, this would then weaken the federal and give more powers to the states and the local governments, which are closer to the people.

The problems of the people would be treated directly by these people. But for me as an individual Nigerian with what I have seen, I would go for a new constitution. There are still some problems with the current one. We can still manage the one we have now because you cannot throw the baby away with the birth water. We can continue to manage what we have and continue the advocacy for a brand new constitution.

We should not play politics with the lives of the people. Whatever you do and you do not do well, you would come back to it. That which you do not do right you would want to come back to it to do it right. That is why our party is saying that let us do this thing in the right way. We should look at the real message. Why can’t you accommodate the views of everybody for a better and greater Nigeria that everybody can be proud of. Some people fought for independence, they have gone now, but we are all enjoying it. So if we postulate some positive things that bring results, we will all benefit from it.

The local government election was recently held in Lagos State and it followed the trend where the ruling party won virtually all the elective posts. How would you assess the election?

There was a climatic problem whereby rainfall affected the election in many areas. But we had a situation, where some councillorship seats were won by some other parties other than the APC. This showed that the election was free and fair. So, those who won councillorship seats but could not win the chairmanship seat, it shows that they did not have enough stamina to win the coveted seats. I saw a situation, where other parties won seats in some wards. It is different from what happens in some states, where the ruling party won all the chairmanship and councillorship seats. What we are saying is that Governor Akinwunmi Ambode of Lagos State is doing well. The foundation was laid by Asiwaju Bola Ahmed Tinubu, former governor Babatunde Raji Fashola complemented it. Now, Ambode is moving across the state with infrastructural development simultaneously and people call him ‘Mr. Wonder’ because of the way he has been working in the face of recession. So, everybody is happy with the administration of Governor Ambode. Don’t forget, the local government administration is an offshoot of the state government. So, there would be replication of all of these in the local governments, and who does not want development in his area.

People are saying that the local governments have not been living up to their expectations. What is your view on this?

Human beings are nor equal. The problem of countries different from one another so also the states and local governments. We have 20 Local Governments and 37 Local Council Development Areas (LCDAs) chairmen in Lagos State. You cannot expect all of them to have the same administrative ability and capacity. You cannot expect all the students in a class to come first. So, you can have a class where everybody is good, but they would share positions. You cannot assess the local governments chairmen now, when election has just been done. Let us give them three months, six months or one year before we assess them. But, I am sure that those that were elected have the ability to do what they have been elected to do.

Two years down the line, your party, APC is yet to fulfil some of its critical electoral promises, especially at the federal level, in the areas of employment, free food for school children amongst others. What can you say about this?

The party has manifestoes and that is what they are working on. There is an intervening factor. Recession is around, we have not said we will not do them. We cannot run all the manifestoes at the same time. The Governor cannot tar all the roads in the local governments at the same time. Government is a continuum. The question should be that is the party doing well or not. It is doing well, it has not reneged on its promises. When the government was coming to power in 2015, nobody knew the extent of the rot in the country then. Nobody knew the extent of the decadence in the country. What we have been doing is to redeem the country.

People have said that your government does nor welcome opposition in any form. How would you react to this?

Are you saying there has been no opposition. Whoever is charged of something would whip up sentiment. The right of everybody is protected by the constitution. There is right to dignity of human life and right to freedom of speech and our government recognises that.

How have you been coping as the Majority Leader of the House?

We have been doing well that is why you see a lot of members of the Peoples Democratic Party (PDP) crossing to the APC.

How have you been meeting the needs of your people in Ikorodu as a lawmaker?

I have been representing them well here and at home. But it is better you go to my constituency to ask them what I have been doing for them since I got to office. We have tried our best to give the people the dividends of democracy as much as possible.