Why The Senate Should Be Cancelled – Egberongbe 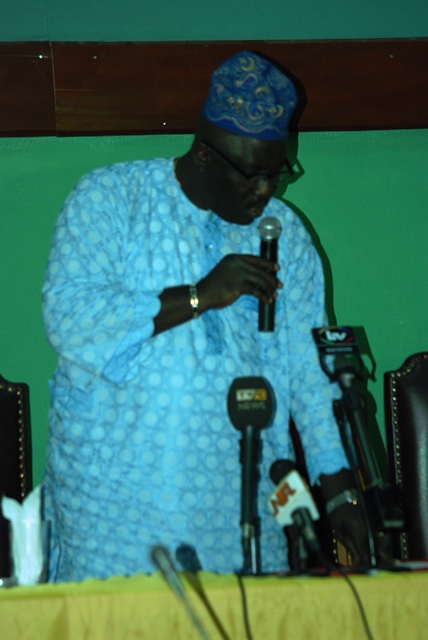 Why The Senate Should Be Cancelled – Egberongbe

A former lawmaker in the Lagos State House of Assembly, who is now the Special Adviser to the Speaker of the Assembly on Political Affairs and Legislative Matters, Hon. Mufutau Egberongbe has advised Nigerians to shun electoral thuggery.
Egberongbe also suggested in this interview that the Senate should be cancelled, while the Federal House of Representatives should stay.

Can you tell us your duties as the Special Adviser to the Speaker of Lagos Assembly on Political Affairs and Legislative Matters?

What are those things you remember as a legislator in the Lagos State House of Assembly, who spent eight years serving the people?

There are so many of them. I remember the session we had before we approved the use of Yoruba Language on Thursday for plenary in the assembly. I was actually against the decision. My position was that if perhaps I did not win election into the House and an Ibo man wins a ticket into the House from Apapa since there are many south easterners in the area, then it would be a subtle way of segregating the people of the area if he could not contribute to the debate on such a day. But, I was proved wrong and today, looking back, I see the decision as a rewarding one because I discovered that the Speaker and other members of the House then were right based on the accolades and the impact the speaking of Yoruba Language on Thursdays by the Assembly has generated. Our language, culture and mode of dressing are our identities that make us different from others. We should not allow our language to suffer erosion because of civilisation. Another one was the special session we had for Asiwaju Bola Tinubu during his 60th birthday celebration. The other one was, when the Governor of the state of Osun, Engineer Rauf Aregbesola was made an honourary member of the House. They are all rewarding experiences and I must say those are part of the experiences I brought to this office.

Do you remember some of your motions and bills then that are still relevant to the people of Apapa today?

I remember I always talked about tank farms generally that they are combustible objects that are destroying our area and that the Federal Government should come to our aid in Apapa. I also spoke about the trucks that park on our bridges in Apapa and that the bridges were not meant for static objects because they could cave in and collapse. Another one was the Bill on Wharf Landing. This was essentially to ensure that something goes back into the state and the local government since the activities of the trailers destroy our roads and they emit dangerous gas.
But, the way the House is couched, you don’t say this is your own achievements. It is a collective responsibility.

How is life after serving as a legislator, and what is your relationship with your people now?

Of course, then we used to distribute empowerment items and I did some sporting and debate activities. Even after I left, I had a football competition for my constituents. To me, governance is a continuum, it is about representing the people and giving back to them.

What would you say are the problems with the Nigerian legislature?

Mostly, our experience with legislative activities has not been so good before now. Anytime the military came in, they close down the legislature and so this makes it new to the people in our body polity. So, there is need for training and re-training of both the lawmakers and legislative officers. We need to have more synergy between the legislature and the executive on the issue of budget and oversight to ensure that the money allocated for projects are judiciously spent. The Rt. Hon. Speaker, Mudashiru Obasa, came up with this town hall meeting. The first was held last year and we held another one this year. This is a yearly event, and this is a way of feeling the pulse of the people so that the government will know what they really want. Then, the House would pass a resolution on it to the executive so that it forms the core of the budget of the state for the new year. I think we should be commended for this concept. We should also commend our constituents too for making time out to be part of the process. Inputs from this year’s meeting were matured ones unlike what happened last year, where parochial and sentimental issues were raised. Now, instead of asking for money personally, the people want to tell you the needs of their constituencies. This means it is impactful to the people and every year, the people would be better for it in terms of talking about their problems.

Which area of our electoral system do you want the government to look at properly?

Electoral practices and processes are functions of the people. We need to ensure that we choose the right persons and base it on merit and not mediocrity. We should not make it a do or die affair. We should shun all forms of vices such as thuggery and hooliganism during electioneering periods. If we, the people have clean minds and we do not allow politicians to use us negatively then it would be better. If we want our electoral system to work, it would work. You must ensure that whoever would represent you has all it takes. We should have a change of value.

Any advice for the government and the people on the economic recession in the country?

We will always have agitations, we depend on mono economy in Nigeria. We depend largely on oil and the price of oil had dropped, and our revenue has also dropped. So, there is need for diversification of our economy. We should not just diversify to agriculture, we should diversify to knowledge-based economy. Look at Mark Zucherberg that came up with facebook, what of Bill Gate that started Microsoft. The world over, things have changed to knowledge-based economy. We should revive and review our curriculum. Let it be tailored to the need of the society and let us begin to cut our cost from the things we don’t need. We should shun foreign goods and make use of made in Nigeria products. We have a lot of them and we have the markets as our population is over 160 million. The government should cut down on expenditure and invest more on infrastructure, and capital expenditure rather than recurrent. They should reduce the size of government, we can have unicameral legislature at the centre rather than bicameral. The senate should go, while the Federal House of Representatives should stay.

Do you have any regret so far and what is your next political plan?

I don’t have regret in any circumstance. I am a very optimistic person. The kind of training I had is a very versatile one. I must tell you that what I am doing now is challenging. It makes me do more researches and break new grounds. I am not to be seeing, I do whatever the Speaker assigns to me. The Speaker is working and the legislators are working. I want to do what I am doing now perfectly and the future would dictate my next move.